(Eczema is a skin condition with an unknown cause)

It comes as a surprise to many people to discover that eczema is often triggered by a throat infection causes by the streptococcal bacteria. This particular strain of bacteria puts out a toxin which weakens the defence system in the throat, but also gets into the bloodstream. Once it has entered our circulation it has the capacity to affect any tissue similar to the throat membrane – including the skin and the membranes lining the joints. This explains the common and surprising origin of eczema and aching joints and why the two conditions often occur together. Infantile eczema commonly originates from the throat.

When this toxin disturbs the skin it can cause a red, often slightly raised, map-like rash, commonly on the neck and over the upper part of the chest. This is known as a ‘strep’ rash. A more common response is for the skin to become weakened and all its functions diminished, although, initially, there is no outward sign of this. It is only when patches of skin are subject to stress, such as irritation through rubbing movements across joints or exposure to cold air, that they erupt into the typical red scaly rash, usually scattered with spots, known as eczema (from the Greek meaning ‘to boil over’).

While damaged tonsils as a result of childhood infections are a common cause of eczema in adults, there may also be other factors involved. With babies and young children, however, a weakened lymph system is by far the most common reason (See Lymphatic malfunction).

If a child is over clothed – and therefore overheated – the throat is more prone to infection. The skin is also more likely to be moist, as the child secretes sweat in a desperate attempt to cool down. Combine this situation with the effect of the ‘strep’ toxin and you have two of the most common causes of infantile eczema. Allergies – especially food sensitivities – which increase the blood supply to the skin, are also a common trigger.

Treatment to improve and alleviate this would include Chi Nei Tsang  (Abdominal massage), Interx and Reflexology. 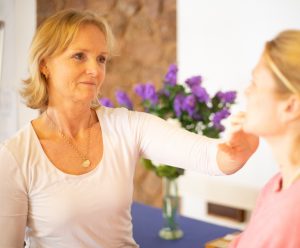